Me and Alan, my sous chef!

What does a nice Jewish girl do on Christmas Eve when eight goyim* come for dinner?  Order Chinese food, of course!  But last Christmas, I decided to throw caution to the wind and make Chinese food rather than call for take-out.  And I didn’t want to be fancy… I wanted to serve the staples of Chinese-American restaurants:  hot and sour soup, shrimp fried rice, beef and broccoli, and my favorite, General Tso’s chicken.  Boston chef Ming Tsai’s website (Ming.com) helped me with most of the recipes, but then I found a lighter version of General Tso’s chicken that’s pan-fried instead of deep-fried.  Hit of the night, ho ho ho!

1. In a medium bowl, combine the sesame oil with the egg white, 1 tbsp. soy sauce, and ¼ cup + 2 tbsp. cornstarch.  Add the chicken, stirring to coat.  Let stand at room temperature for 20 minutes.

2. In a small bowl, whisk the chicken broth with the chile-garlic sauce, sugar, and the remaining ¼ cup soy sauce and remaining tbsp. cornstarch.

3. In a large saucepan, heat the oil, add the ginger and garlic, and cook over high heat until fragrant, about 1 minute.  Add the broth mixture to the pan until thickened and glossy, about 3 minutes.  Keep warm.

4. In a large, deep skillet, heat ½” oil until shimmering.  Add the chicken a few pieces at a time, and fry over high heat, turning a few times until very browned and crisp, about 4 minutes.  Drain the chicken on paper towels and add to the sauce, along with the scallions.  Cook briefly, until coated.  Serve immediately with steamed rice and broccoli.

Wanna try the “best pizza in NY” (according to Jon Stewart, and ok, Zagat’s) but not have to wait an eternity for a table?  I went to Grimaldi’s recently, the famous pizza joint underneath the Brooklyn bridge, and we got in – on a Friday night at 9, no less – without having to wait more than a few minutes.  How?  We were a party of three rather than two, so we waltzed in past a huge cue of pissed off-looking couples almost instantly.  Moments later, a smoky, crisp, kind of perfect pizza adorned our table, and it might’ve tasted even better knowing how quickly we got in!  So next time you have date night, grab an extra friend or a guy crossing the bridge if you have to, and go to Dumbo with confidence.  Even on the weekend!

“He makes that play, and it’d be a whole different game right now,” said an ESPN anchor during a football game last night.  Then, on the local news, “If Carmelo passes rather than take the shot, we’re in overtime.”
Um, don’t mean to be a school marm or anything, but haven’t these plays taken place in the past?  Shouldn’t he have said “If he made that play…” and “If Carmelo passed … we’d be in overtime”?

I watch a lot of sports on TV and this happens all the time.  Why do sportscasters seem to get a pass on bad grammar?  Is it that they only need to appear brash and authoritative and not necessarily smart?  It reminds me of the time I moved to Spain without speaking a word of Spanish besides “Átame!” and “Hable con ella,” and a friend told me just to speak in the present tense and begin each sentence with “ayer” (yesterday) or “mañana” (tomorrow).  In other words, to take the easy way out while learning Spanish.  So should Al Michaels start his Sunday Night Football broadcast with“Ayer… “ or do I need to move back to Spain and keep living in grammar oblivion? 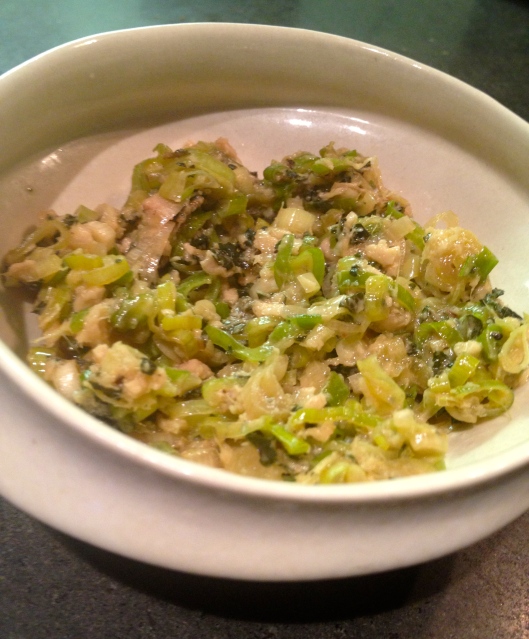 Move over pesto, mama’s got a favorite new sauce!  If you’ve ever been to any of the Momofuku restaurants in NYC, maybe you, too, have savored every bite of Chef David Chang’s classic Ginger Scallion Noodles.  But did you know how great that sauce is on almost anything, and how easy it is to make?  So far, I’ve had it on roasted salmon, pan-fried shrimp, ramen noodles, jasmine rice, and even vermicelli.  It’s also great on grilled fish or meat.  It’s just a whole lotta’ sweet ‘n sour goodness with a kick (read: ginger!) and even though, consistency-wise, it’s more like a relish than a sauce, it’s my new favorite ‘must-have’ in the fridge!

Mix together all ingredients in a bowl, adding more salt if needed.  Let stand at least 15 minutes, open your refrigerator, and see what you can put it on! 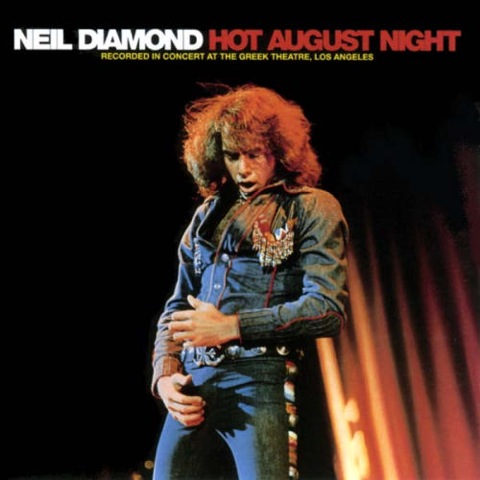 My friends have made fun of me for years but I don’t care.  I love Neil Diamond.  There, I said it.  And I’ve loved him for a long, long time.  It all started when my older brother gave me his entire record collection as a Bat Mitzvah present, which come to think of it, was a pretty sweet gift. And out of all his records, I liked “Hot August Night” the best – a live recording of Diamond singing his songs on, well, a hot August night in 1972 at the Greek theater in LA.

Say what you will about his later, schmaltzy stuff and those shiny dress shirts he wore — back in the 70’s, ND was one cool dude.  He wrote songs like nobody’s business, and he shines at the Greek in such classics as “I Am … I Said” and “Holly Holy”.  And I’m sorry, but how could anyone listen to “Cherry Cherry” and not grunt along and love it?  There’s the occasional silly stuff (“Porcupine Pie”?), but check out his “Red, Red Wine” and “Solitary Man” before they were covered by younger pop stars.  Listen to the romantic “Play Me” or the lovely “Canta Libre” and even “Sweet Caroline” before it was over-played at Fenway Park.  His voice is strong and soulful, his band is tight, and listening to this old album almost erases the memory of his god-awful remake of “The Jazz Singer” with Laurence Olivier.  Huuuh!

Got a pesky mother-in-law coming for dinner, or maybe an always-hostile ex over for the holidays?  Worry no more.  I made a cranberry sauce for Thanksgiving once that was so good, my sister, who wasn’t speaking to me at the time, felt compelled to actually look my way and mutter “This is incredible!”.  Yep, it was so good she lost herself and just had to speak to me.  It’s spicy and sweet, with regular and brown sugar, and the pièce de résistance?  WINE instead of water.  You’re welcome.

Combine all ingredients except cranberries in medium saucepan. Bring to boil over medium-high heat, stirring until sugar dissolves. Reduce heat and simmer until reduced to 1 3/4 cups, about 10 minutes. Strain syrup into large saucepan. Add cranberries to syrup and cook over medium heat until berries burst, about 10 minutes. Cool. Transfer sauce to medium bowl. Cover and refrigerate until cold.

Do you still watch Grey’s Anatomy but roll your eyes every time another “Life Changing!” storm hits Seattle?  How about that silly “Initiative” plot line on Revenge, yet, five bucks says you can’t give it up?  Then what you’re doing, ladies and gentlemen, is hate-watching TV.  And I do it too.  A lot.  I’m pretty sure the term was first coined in the not-too-distant past for that NBC debacle Smash, because what theater-loving TV viewer didn’t tune in to this wreck-with-the-best-intentions, only to cringe every time the kids started singing in a bowling alley or Debra Messing ran into yet another Broadway belter in Times Square?  It became more and more outrageous with each passing Monday, but still, we tuned in.  And still do.  Because it’s Bombshell on Broadway!  It’s Meredith and Derek!  It’s Emily, or is it Amanda?!  Oh god, I need a life.