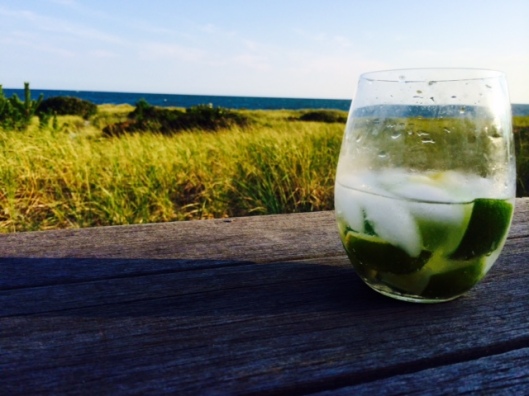 Why did I only learn about this drink the night after the World Cup ended??  I wanted to enjoy the World Cup, I want to like soccer, I want to call it futbol like cool people, I even want to travel to Uruguay and paint my face.  But let’s face it — I’m a red, white + blue baseball girl to the core, so while I cheered on American Tim “The Human Wall” Howard and marveled at the acting chops of the Dutchmen, I have to admit that I was a little ….. bored.  I promise you I’m no Ann “soccer is foreign” Coulter, and I think it’s a terrific sport, the world’s sport.  I just don’t understand it. 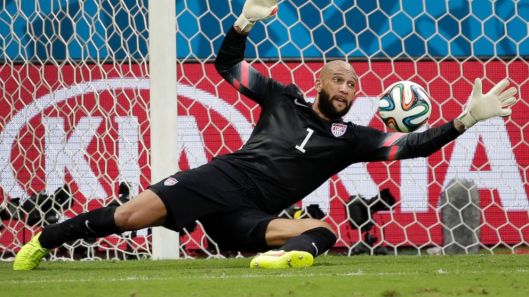 What I do understand, however, is a good summer cocktail, so when I went out on Sunday after Germany beat Argentina in the Final, I was overjoyed to discover that there’s a companion drink to the Caipirinha, the long-popular Brazilian drink.  It’s called the Caipiroska, equally popular throughout South America and equally delicious.  There’s lots of lime and lots of sugar, yet instead of the Brazilian cachaça liquor, the Caipiroska is made with vodka.  Oh snap, I thought, I’m making these tomorrow!  NYTimes food writer David Tanis says that “Caipiroskas are best served with a beach in view, on the beach itself, or with a beach in mind.”  Anyone know of a good beach in Uruguay?

Cairpiroska
from “One Good Dish” by David Tanis

Put the limes and sugar in a cocktail shaker or sturdy glass.  Mash vigorously with a wooden muddler or pestle.  Add the vodka and a few ice cubes, shake well, and pour into a rocks glass.

Posted by Leah | Filed under RECIPES, THE SPORTING LIFE 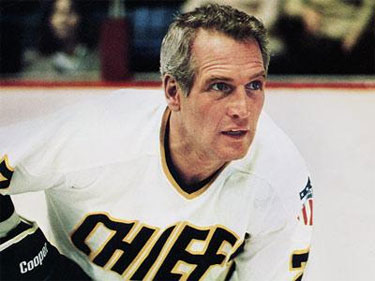 What is icing?  How about high sticking?  If you don’t know, then you probably won’t be tuning in to the Stanley Cup Finals, which start tonight.  What’s the Stanley Cup?  Oh dear…. you might want to check out my recipes (see: cakes, icing).

The Stanley Cup, of course, is the championship playoffs of the NHL (National Hockey League).   As an avid sports fan who follows baseball, football, basketball and SportsCenter pretty religiously, I’ve always wondered why I never got in to hockey.  My father loved the Detroit Red Wings, my brother lovingly taught me and my sisters what a hip-check was, and I was fascinated by the players’ gorgeous skating during the one game I saw live.  But watching on TV?  Zzzzzzzzzz.

The one thing I do love about hockey, however, is the movie “Slap Shot.”  A raw and raunchy comedy from the late ’70’s, it stars Paul Newman in his oh-so-sexy prime, as the veteran coach/player of a downtrodden minor league hockey team (the Chiefs) who realizes that dirty play and fighting is what brings in the fans.  The roster of characters is priceless, especially the completely clueless Hanson brothers, three bespectacled goons who are so outlandish that if the movie came out today, they’d get their own spin-off. Having just seen it for the first time in years, I was struck by a) how Connie Britton/Tammy Taylor-ish Paul Newman’s wife is, b) they didn’t wear helmets in the ’70’s?!? and c) only Paul Newman could look manly in a long leather coat with fur trim. Oh, and for the umpteenth time, I pee’d my pants during the final (hockey) scene.  Don’t believe me?  Forget ESPN and the Yankees and the French Open tonight and check out this hilarious sports gem of a movie, eh?

The bloom is off the friggin’ rose. Yes baseball folks, it’s time to admit the truth – it’s not as much fun to be a Red Sox fan in New York anymore.  And by fun I mean contentious, controversial, painful!  Boston fans in NYC, like me, used to wear our Sox gear around town as a badge of honor, a kind of “yeah we lost again but we’ll get ya next time” pledge that elicited a few smirks, a lot of pity, and always a conversation.  But now the unthinkable has happened – we won.  And won again, and again!  So now Yankee fans look at me when I’m wearing my Sox hat and, to my great disappointment, just look away.

It wasn’t always like this, of course.  I moved from Boston to New York in October of ’86, when just days into my move I couldn’t believe my luck as the Sox were about to win the Whole Thing in Queens.  Queens!  Just a few miles from where I now lived, I excitedly told a friend back home, and said “I”ll call you back when we win!”  I never called her back, of course.  Was the universe trying to tell me something?  Let’s just say Bill Buckner and I probably went into therapy around the same time.  Years passed, I started hanging out at a Sox bar in the Village, and then 2003 happened – the would-be classic Game 7 in the Bronx where we were finally going to put the ghosts to rest and head to the World Series by beating our heated rivals.  Um, it didn’t happen.  It was bad.  My friend had to walk me home that night, even though I lived only blocks from the bar, because he feared for my safety.

Thank god for 2004 and the “Greatest Comeback in Sports History” (it’s true, my t-shirt says it!) or my mental health bills would rival, well, Bill Buckner’s.  For the first time in 86 years, we were World Champs and lovable losers no more.  All Yankee fans could yell at us now was “Enjoy your ring, we’ve got 26!”  And then the strangest thing happened … we won again!  We started getting used to winning, and when we won again last year, it seemed like Yankee fans got used to us winning too.  I’m ecstatic, of course,  but I must admit it’s sort of taken the fun out of it.  Gone are the days of my heated debates with Yankee friends about Jeter vs. Nomahhh, A-rod vs. E-rod, the Bronx vs. Kenmore Square.  Gone, too, are those “Aw, good for you” looks when I’d wear my Sox t-shirt to the gym, those drunken “1918!” chants when I’d head to a game, even those “Your dog sucks!” shouts when I’d proudly walk my dog Ruby along the Hudson River in her, ahem, Sox coat.  Ah, memories.  Now all I get is “Isn’t she pretty?” or worse – nothing.  The bloom is off the (Bucky) Friggin’ (Dent) rose, right?! 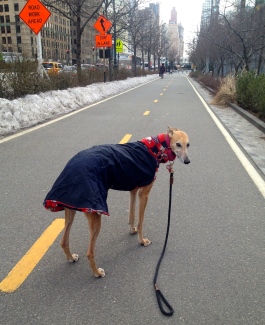 Ruby along the West Side Highway

Is there anything really left to say?

Hey, up there, thanks man!

You know how certain baseball sluggers tend to point to the sky after they’ve hit a home run, thanking the Big Man Upstairs for their good fortune (or at least good luck)?  The same goes for pitchers.  Baseball’s greatest closer, the deeply religious Mariano Rivera, used to point upwards after safely closing out a game, and he was hardly alone (though a bit more subtle than most).  But if you think about it, why don’t they ever do just the opposite after they’ve struck out, or, after they’ve been lit up?  You’ll never see David “Big Papi” Ortiz curse the other Big Man or (gasp!) give the middle finger after getting strike three, nor any pitcher giving The Sopranos’ stuggatz sign after giving up multiple hits.  Sure, there’ll be some under-the-breath mutterings as they walk slowly, head down, to the dugout.  But why the double standard?  If they’re quick to give thanks after their home run trot, it’s only fair that someone, just once, would give a big ol’ “Up yours!” after an epic out.  Man, if Alex Rodriguez did that, I’d stand up and cheer him for the one and only time!

“He makes that play, and it’d be a whole different game right now,” said an ESPN anchor during a football game last night.  Then, on the local news, “If Carmelo passes rather than take the shot, we’re in overtime.”
Um, don’t mean to be a school marm or anything, but haven’t these plays taken place in the past?  Shouldn’t he have said “If he made that play…” and “If Carmelo passed … we’d be in overtime”?

I watch a lot of sports on TV and this happens all the time.  Why do sportscasters seem to get a pass on bad grammar?  Is it that they only need to appear brash and authoritative and not necessarily smart?  It reminds me of the time I moved to Spain without speaking a word of Spanish besides “Átame!” and “Hable con ella,” and a friend told me just to speak in the present tense and begin each sentence with “ayer” (yesterday) or “mañana” (tomorrow).  In other words, to take the easy way out while learning Spanish.  So should Al Michaels start his Sunday Night Football broadcast with“Ayer… “ or do I need to move back to Spain and keep living in grammar oblivion?